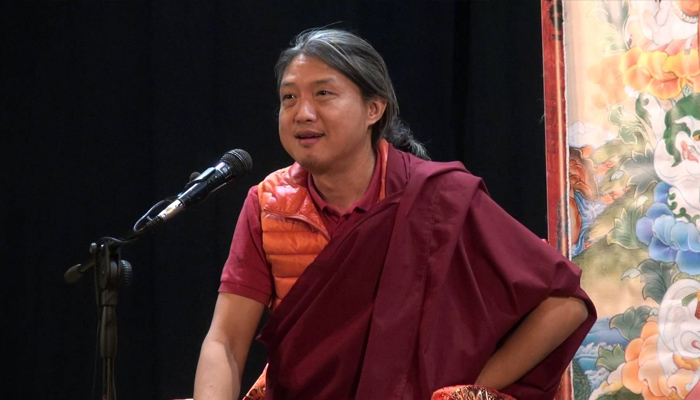 He is the son and spiritual heir of His Eminence Terton Namkha Drimed Rabjam Rinpoche, holder and supreme head of the Ripa lineage. His mother Khandro Chime Dolkar, also descends from a noble family of Bhutanese descent. Kyabje Chatrel Rinpoche has said to Jigme Rinpoche that he is the “son of a father who resembles a tiger and of a mother who resembles a leopard.” Gyetrul Jigme Rinpoche is the 6th throne-holder of the Ripa , or hereditary line, into which he was born, and which he will hold in future as heir.

He is also serving as the 5th incarnation of the Terton Pema Lingpa, head of the Pema Lingpa lineage of Gyeyling Orgyan Mindrolling monastery in the hidden land of Pemako, which he carries forward from his previous life, as Tulku (emanation body).He was recognized at the age of three by His Holiness Kyabje Dudjom Rinpoche, the supreme head of the Nyingma lineage, as the reincarnation of Gyeyling Yonten Lhundrub Gyatso Rinpoche, a manifestation of the Bhutanese Terton Pema Lingpa, one of the five principle or emperor Tertons of Vajrayana Buddhism.

He was enthroned at the age of five, at Rigon Thubten Mindrolling monastery in Orissa, India. Upon enthronement, H.H. Dudjom Rinpoche, gave him the name Gyetrul Jigme Lodoe Thaye Norbu Rinpoche. Rinpoche’s other previous lives include: Manjushrimitra (Jampel Shenyen), one of the great eight Vidyadharas from India, and master of the Dzogchen lineage. During the time of Guru Rinpoche in Tibet, he was the daughter of the King Trisong Deutsen, the Princess Pema Sal.

At the age of eight, Rinpoche went to study for six years at a modern school in Darjeeling, outside the monastery, so that he could both learn English and have contact with the outside world. During these six years, he led a normal boy’s life. Rinpoche considers this to have been a very precious period in his life, since he was able to enjoy a normal life, play with others, have normal relations, and be with life in an ordinary human way, which he considers to have brought him great riches. Nevertheless, just as he was enjoying this ordinary life, he received a letter to return to the monastery, and return to the traditional course of studies.

From these teachers he has received all of the principal Nyingma transmitted teachings, the Taksham Cycle of Transmitted teachings, including especially the practice of Tamdrin and Lama Norbu, and the unbroken Vidhyadhara transmissions of the Ripa lineage, including the Mahasadhanas of: Thugdrub Lama Norbu (The Heart Practice of Lama Norbu), Yidam Gongdu Drubchen (Compilation of the Intentions of all Meditation Deities),the Dorsem Nyingthing (The Heart Essence of Vajrasattva), and the Guru Kilkilaya or Lama Phurpa, as well as the entire ‘Cycle of Gesar Mind Treasures.’ Other teachers also include: H.H. Dilgo Khyentse Rinpoche, Kalu Rinpoche, and His Eminence Khatog Moksa Rinpoche. Moreover, Gyetrul Jigme Rinpoche is the great, great grandson of the renowned Yogin Drubwang Shakya Shri, who was considered to be the greatest Siddha of his time. He has studied with and received transmissions from the Drukpa Kagyu tradition teachers, especially those of the Shakya Shri lineage: the 12th Gyalwang Drukpa Rinpoche and Kyabje Thuksay Rinpoche.

In addition to fulfilling his role as a spiritual teacher, Rinpoche began his spiritual career in September 1993 in Orissa, India, to fulfill his humanitarian role as a socially engaged Buddhist, a term he is happy to be known by, and which has become a central part of his life’s work. Being born in India, Rinpoche has firsthand experience of the plight of Tibetan refugees and local villagers alike in finding and retrieving potable water. This inspired him to found the Safe Drinking Water Project for which he received great admiration and a citation from His Holiness the Dalai Lama and the Tibetan Government in Exile.

Having already worked to implement five water projects within his own local refugee community, as well as a sixth local Indian village, and having seen the enormous benefits that this has brought, he became inspired to aid others, in order to reduce their suffering, knowing that all it takes is a little planning, generosity, work, and education. Having seen the communities come together, and how easy it is to make a difference, has been very rewarding and has become a key part of his work in this life. Other projects he also directs include the setting up of a Malaria Prevention and Treatment Program (Malaria Control Projects), Education & Scholarship, Eco-Dharma Projects related to an awareness of the environment, Health Awareness, as well as directing programs to support orphans, schoolchildren, monks and an old age home.

Rinpoche has spent time in retreats ranging from three months to one year. His principle teaching includes practices for the deities: Yeshe Tsogyal, Guru Rinpoche, Medicine Buddha, and Chenrezig, as well as the deities of the Taksham Cycle of Teachings of the Ripa tradition, including especially the New Treasures Cycle of Gesar Teachings, from the revealed treasures or Termas of His Eminence Namkha Drimed Rabjam Rinpoche. In addition, he also has close affinities with the deities Manjushri and Gesar.

Gyetrul Jigme Rinpoche first travelled to Western countries in 1996, giving his first teachings in Europe. Since then, he established Padma Ling Centers, a network of Dharma Organizations in – Switzerland, France, Belgium, Luxembourg, Spain, Germany, the UK, as well as a center in Japan. Rinpoche is known for his fluency in English and his lively, direct, fluid, humorous and down to earth teaching style. His clear and fresh outlook very quickly cuts through cultural and personal misperceptions about the Buddha Dharma, East and West, ancient ways and modern life, and individual confusion. His experience and understanding of modern life bring humor and liveliness to the timeless truths of the Buddhist tradition.

Rinpoche’s teachings focus on the themes of openness, and a clear perception of life in its immediacy, unadorned by interpretation and judgment. Rinpoche travels between the East and the West. In the East he oversees the continuation and work of the sacred tradition in exile, including leading and caring for the Ripa Monasteries in both Nepal and India, along with their growing monastic communities, as well as looking after the Tibetan community in exile. As heir to the Ripa hereditary lineage holder, Rinpoche has taken on the administration, supervision, and realization of the New Treasures Project conceived by his father and root teacher H.E. Terton Namkha Drimed Rabjam Rinpoche. In the West he continues his teachings through the various international Padma Ling organizations, the Ripa Ladrang Foundation, and Ripa Russia, and is actively building the community and its foundation.

In 2012 one of the most important long-term visions of Gyetrul Jigme Rinpoche has been accomplished under the blessings of his father H.E. Terton Namkha Drimed Rabjam Rinpoche. The vision was to build the ‘Ripa International Center ‘ for the benefit of the Sanghas throughout the world. The first Ripa Center in the West was completed in July 2012, located just outside of Bern, Switzerland. This newly acquired Seat was inaugurated and blessed by the three lineage Masters, H.E. Namkha Drimed Rabjam Rinpoche, Dungsey Gyetrul Jigme Rinpoche and Dungsey Lhuntrul Dechen Gyurmey Rinpoche, in the presence of numerous representatives including public authorities, dignitaries, and organizations. This Center in the West is the Seat, where all the spiritual activities of the Ripa lineage in Europe take place. As an abode of peace and inspiration, the center strives to provide a wide range of educational opportunities that aim to sharpen our senses and minds for what is essential, as well as to facilitate confrontation with the timeless truths of Buddhism.

In this spirit, the Center organizes regular meetings to practice together. These meetings are open to all. The practice contains specific forms from the teaching tradition of the Ripa lineage. Thus, for instance, visualization, mantra recitation and meditation are helpful means to bring us closer to our own spiritual nature. Accordingly, our ways of thinking and acting become calmer and clearer, and we develop a more open and more tolerant attitude towards ourselves and towards our fellow human beings. The center is also open to organizations with similar objectives to hold their courses, meetings, seminars here, or for other special occasions. Likewise, it offers a most suitable environment for individual retreats.