The Dakini Prinicple: Integrating the Teachings with Life 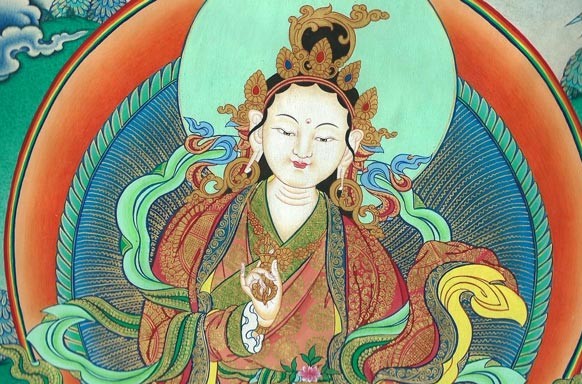 The feminine role in the Buddhist tradition is one of the most important sources through which one obtains the inspiration to engage in the practice of the Buddha Dharma. There have been numerous significant female pioneers in the Tibetan Buddhist tradition, begining with the ‘Primordial Mother Buddha, Samantabhadri’ (Kuntu-Sangmo), Arya Tara, Sarasvati, Sukhasiddhi, Niguma, Yeshe Tsogyal, Mandarava, Machik Labdron, Jomo Menmo, Sera Khadro, Tare Lhamo and many more. The Tibetan understanding of the feminine principle as mother was drawn from a variety of sources within the Buddhist tradition. The most important source was the Yumchenmo, the Great Mother Prajanaparamita-Sutra of Indian Mahayana, which dates from the second century B.C.E. and which continues to influence Tibet until the present day.

While the enlightened warrior-king Gesar of Ling demonstrates the best of masculine capacity, through authentic presence and compassionate blessings, so too does Yeshe Tsogyal demonstrate the best of the feminine capacity, through engaging with life with wisdom. It is the feminine that is particularly suited to cutting through defilements, obstacles, hindrances and ignorance. The feminine naturally accentuates mother-like loving kindness and gentleness, and yet is able to face experience fully and work directly with tantric energy in all its rawness.

These abilities complement the strength of the masculine, and together, they support each other so that life is lived fully and engaged fully. Women integrate the practice of the ‘Twofold Method and Wisdom’ and through this union of method and wisdom, one leads to the state of enlightenment, which is free from the sufferings of Samsaric life. Therefore, no matter where and how one abides, one can contribute, in one of several ways – through generosity, through social engagement, through wisdom, or through practice. This is indeeed how one lives a worthy life.

According to Tibetan Vajrayana Buddhism, it is clear that there is no difference between male and female in terms of practicing and accomplishing enlightenment. Moreover, it is importantly emphasized in the Vajrayana treatises that the great female practitioners play a key role in the spiritual journeys of all beings through guiding, teaching and empowering them, and have indeed benefitted countless sentient beings in the past. For Tibetans, the ‘feminine’ refers to the limitless, ungraspable and aware qualities of the ultimate nature of mind; it also refers to the intensely dynamic way in which that awareness undermines concepts, hesitation, and obstacles in the spiritual journeys of female and male Vajrayana practitioners.

The ‘masculine’ relates to the qualities of fearless compassion and actions that naturally arise from the realization of limitless awareness, and the confidence and effectiveness associated with enlightened action. From this sacred view, we can understand how important it is to unite or couple together the masculine and feminine qualities in order to extend further the secret practices in Vajrayana Buddhism. Vajrayogini (Dorje-Naljorma) is considered to be the queen of all Dakinis in the Tibetan Buddhist pantheon; she is the preeminent tantric form of the female Buddha. Vajrayogini is important in all the tantric lineages of Tibet and is said to have directly transmitted her teachings through the Siddhas Naropa, Maitripa, and Indrabhuti.

She is particularly connected in the ‘New Translation School’ (Sarma) of Tibetan Buddhism with Annutara-yoga-tantra, the Unsurpassable Meditation Approach that is the highest of the four orders of tantra. Vajrayogini also has alternate forms such as in the Cakrasamvara tradition, in which the form closest to Vajrayogini is Vajravarahi, the Vajra Sow (Droje-Phakmo). Kurukulla is yet another form of Vajrayogini, one that especially magnetizes passion and transforms it into wisdom. The most wrathful form of the meditation deity Vajrayogini is Troma-Nagmo, Kalika, Wrathful Black Lady. She is particularly associated with the ‘Chod’, Severance Practice, a tantric meditation discipline based on the Prajanaparamita. Troma Nagmo is also the supremely wrathful manifestation of Vajravarahi.

The Dakini Yeshe Tsogyal was one of the most inspired and prominent consorts of Guru Padmasambhava and the speech-enamation of Vajravarahi. She embodies the full meaning of ‘sky-dancer,’ (dakini) when she appears, and her visionary form is classically understood to be dancing, which dynamically unfolds her wisdom, unceasingly manifesting the activities of the Buddha. She is called Sarasvati (Yangchenma), the great female Bodhisattva of learning, culture, and music, the peaceful consort of Manjushri. Yeshe Tsogyal in her visionary dimension was the radiant White Tara (Dolma-Karmo) the savioress who, with her compassionate seven eyes, attends to the health and welfare of beings in all quarters. In her most subtle, essential form, Yeshe Tsogyal is called ‘expanse of Mahasukha Kuntu Sangmo Samantabhadri, the all-good queen.’ This deity is called the primordial Mother Buddha, source of all enlightenment.