King Gesar of Ling and the Ripa Lineage 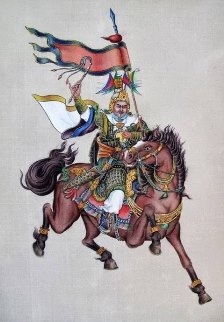 The enlightened warrior-king Gesar (1038-1119) of Ling was born into the family of Mukpodongclan, in a place of natural beauty between Dzachu and Drichu, in the middle of the highland pasture called ‘Sa-Chi-Soe-Yak’. The advent of King Gesar in Tibet has been predicted by Shakyamuni Buddha in the Tantra called ‘The Root Tantra of Manjushri’ (Jampal-Tsa-Jud). According to the predicted verses, it is clearly stated that he is the body emanation of Manjushri, speech emanation of Avalokiteshvara, and mind emanation of Vajrapani. He was one of the greatest Tibetan Bodhisattva-kings, a manifestation of Padma Sambhava of whom it is predicted that he will take birth in the Land of Snow during the era of degeneration ‘Kaliyug’.

Gesar’s childhood name was Choru, he was unique and always under the protection and guidance of divine forces. His courage, brilliant wisdom and gift of divine power brought hope and joy to his parents and friends. Before long, at the age of 13, against all expectations, he won his first victory, the famous Horse Race of Ling. He proclaimed himself Sengchen Norbu Dradul, the Great Lion, Wish-fulfilling Jewel, Subduer of foes. The youthful King Gesar assumed the Golden Throne of Ling. He was attired in warrior’s armor and carried a divine bow, arrows, swords, spear, helmet and a shield, all adorned with resplendent jewels. Gesar’s main mission on earth was to defeat the enemies of his people’s peace, bringing forth happiness and peace for the people, to propagate and preserve the Dharma. The warrior-king Gesar was recognized as the emanation of Padmasambhava and Padmasambhava himself prophesied that in future a ‘warrior-king’ would need to come in order to tame the malevolent forces of the times.

The profound connection between King Gesar and the Ripa Lineage could be explained in different ways, but the most important connection comes from the 4th Ripa Lineage-holder, H.E. Terton Namkha Drimed Rabjam Rinpoche. From childhood, His Eminence had a clear recollection of his previous life as King Gesar’s brother, Gyatsa-Zhelkar. His Eminence repeatedly encountered the Three Roots, especially the warrior-king Gesar, his brother Gyatsa, the great minister Dhenma etc., and blessings were bestowed upon him. Particularly, at the age of 13, His Eminence frequently dreamt and had direct experiential visions of Gesar Akar Werma, who became one of the principal meditation deities of His Eminence, and who blessed, prophesied, protected and guided him during the time of vulnerability in Tibet.

Moreover, another important connection between King Gesar of Ling and the Ripa Lineage is the tradition preserving ‘Lingdro,’ which literally means the ‘Dance of Ling.’ ‘Lingdro’ is a ritual dance containing Dharma terms with poetic style that invokes the deity King Gesar of Ling in order to bestow blessings, strength, energy and courage. Historically, ‘Lingdro’ traces its origin back to the warrior-king Gesar of Ling, where this traditional dance was performed after and before the commencement of new activities, which represents auspiciousness and prosperity. It was later firmly established and disseminated by the 5th Radreng/Reting Rinpoche (1912-1947), who was the regent of the 13th Dalai Lama, Thubten Gyatso.

The performance of the ‘Lingdro’ was first started at Dzogchen Monastery in eastern Tibet, Kham, and, later on, it was performed at Radreng Monastery in Tibet. After a long time, it was again preserved and performed in the Orissan Tibetan Settlement Community initially under the guidance of Dropon Norsang. From then on, the first ‘Lingdro Association’ in exile was established in Orissa. Gradually, the Lingdro was mainly preserved by the Ripa family lineage under the guidance of H.E. Terton Namkha Drimed Rabjam Rinpoche.

Dhungsey Karma Shedrub Rinpoche (brother of His Eminence) was one of the main responsible persons of the Lingdro Association after Dropon Norsang. Dhungsey Karma Shedrub had infallible faith and devotion to King Gesar from the time of his childhood. In 2003, in order that the this sacred tradition of Lingdro would not decline, he painstakingly founded the New Lingdro Association. In particularly, he edited and codified the ‘Main Text of Sacred Dance’ (Dro-Zhung) – derived from the Pure Vision Terma of Jamgon Mipham Rinpoche (1846-1912), and additional lyrical verses (Zur-Jug) composed by the 5th Radreng Rinpoche (1912-1947). The name of the text is entitled the ‘Dance of Ling, Music of Great Bliss – Marvelous Roar of Auspiciousness’ (Lingdro-Dechen-Rolmo-Ngo-Tshar-Shie-Pai-Ged-Jang).

Kyabje Dudjom Jigdral Yeshe Dorje repeatedly advised the Tibetans in Orissa that it is necessary to perform ‘Lingdro’ continuously, in order to pacify all degenerated and negative influences of the time and place, and to gain peace and prosperity. It is also one of the indispensable parts incorporated within other Sadhana practices of the enlightened warrior-king Gesar of Ling. His Eminence’s three eldest daughters, Semo Sonam Paldzom, Semo Pema Dechen, and Semo Sonam Palmo are accomplished singers and dancers in the Gesar tradition. His Eminence’s youngest daughter, the Sakyong Wangmo, Dechen Choeying Sangmo, is the wife of Sakyong Mipham Rinpoche and has taught ‘Lingdro’ to the community of the Shambhala Buddhist tradition in the West. This exceptional tradition of ‘Lingdro’ has been preserved and propagated by the ‘Odisha Lingdro Association,’ headed by the Ripa Dhungsey Tulku Karma Shedrub, Semo Sonam Palzom, Semo Pema Dechen and Semo Sonam Palmo.