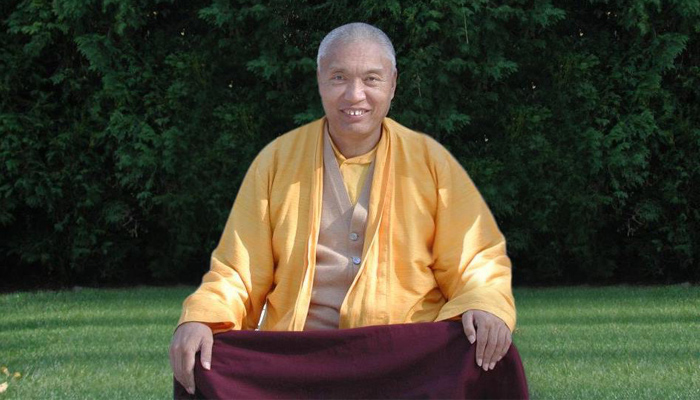 His Eminence is a brilliant teacher, a practitioner, a master of profound hidden Treasure-teachings (Terma), deeply immersed in the lineage of formal practice and realization. His followers throughout the world hold him in high esteem for his supreme realization, his wisdom, and for the power of his practices for healing, divination, and the pacification of obstacles.

His Eminence was born in 1939 to his father Ripa Jigme Tsewang Chokdup (the 3rd Ripa Lineage Holder) and his mother Mayum Palden Tsomo, one of the great grand daughters of Drubwang Shakya Shri. Drubwang Shakya Shri’s son and spiritual heir Dungsey Phakchok Dorje recognized him as being the rebirth of the master and visionary saint Terton Yongey Mingyur Dorje (1628/41-1708) and gave him the Candali long-life empowerment and named him Namkha Drimed Rabjam. He was also recognized by Nyakrong Terton Jigme Choejung Lingpa as an emanation of Do-Khyentse Yeshe Dorje.

At the age of nine, he was enthroned as the 4th Ripa lineage-holder, and at the age of thirteen he had a direct vision of Guru Rinpoche who gave him the empowerment of the display of awareness and the secret name Dorje-Zijid-Tsal. Thus empowered as the Guru’s regent, he thereafter revealed Mind Treasures of the awareness display.

He repeatedly saw visions of Gesar of Ling and, being the reincarnation of Gesar’s elder brother Gyatsa Shalkar, clearly remembers his former life. Serving many great masters, including his father, the Yogi of clear light Great Perfection, Jigme Choejung Lingpa, the sixth Taksham Tulku Karma Sangngak Tenzin Dorje, Basha Lama Tashi, and so forth, he practiced the cycle of Taksham teachings in general, and in particular, the extensive practices of the Lama Norbu (Guru Saddhana), beginning from yogic exercises of the channels and winds up through the main practices on Trekcho and Togal, through which he perfected the Four Visions. Similarly, while in Tibet, His Eminence received the entire lineage of Rinchen Terdzod from the Vidyadhara Chogyam Trungpa Rinpoche.

As the future circumstances of Tibet being clearly set forth in prophecy, in 1958 Rinpoche, together with his retinue of attendants and disciples, escorted by Dharma protectors, traveled safely through the hidden land of Pemako and eventually settled at the Phuntsok Ling Tibetan Settlement in Orissa. In order to preserve the tradition of the Ripa Lineage, and the Profound Treasure Teachings of the great Tertön Taksham Nuden Dorje, together with is elder brother, Drubwang Adzin Rinpoche, he founded a temple in the 1970’s for the benefit of the Sangha, and the restoration of Tibet’s rich spiritual heritage in exile, India. The new Temple was inaugurated by His Holiness the Dalai Lama and given the name Rigon Thubten Mindroling. Today, there are around 200 monks in residence as well as several hundred lay practitioners within the Tibetan communities. Many of the great realized masters of Tibetan Buddhism composed praises and salutations to His Eminence, and His Eminence has in turn received Empowerments, and the Oral Transmissions of Kama and Terma, from Kyabje Dudjom Rinpoche, Chatrel Rinpoche, Kyabje Dilgo Khyentse Rinpoche, Nyoshul Khen Rinpoche and others, particularly the ‘Treasure Trove of Precious Hidden Teachings.’

Eminence’s teachers include His Holiness the 14th Dalai Lama, His Holiness the 16th Gyalwa Karmapa, Kyabje Dudjom Rinpoche, Kyabje Dilgo Khyentse Rinpoche, Dodrubchen Rinpoche, Drukpa Thugsey Rinpoche, Neydo Karma Chagmed Rinpoche, Drubwang Penor Rinpoche, Chatrel Sangye Dorje Rinpoche, Trulshik Rinpoche, Kalu Rinpoche, Dhungsey Thrinley Norbu Rinpoche, Nyakrong Lama Rigzin Gyatso Rinpoche and others. His Eminence has engaged in obstacle clearing rituals against such calamities as disease, famine and war, as well as natural disasters of the four elements such as windstorms and drought in various places, including the Orissan Tibetan Community, the Maratika Cave in Nepal, and in the West. He has command over the local deities, Nagas and Guardian deities in these places and through engaging in the pacifying rituals to clear away the negativities, is able to confer joy and peace among the inhabitants of such locales. With respect to his mind Termas, in the The Story of the Secret Key, Padmasambhava says:

In that turbulent degenerating time I Lotus-born Guru will promulgate for the benefit of future generations Various Sadhana practices appropriate to the times. For the purpose of Pacifying, Enriching, Magnetizing and Destroying, Particularly, wrathful rites for averting armies at the border. According to the King Gesar of Ling, a heroic tamer of negative forces.”

In accordance with the unfailing Vajra words of Guru Rinpoche, when the appropriate circumstances have come together, in the hidden land of Pemako, in Orissa, in Darjeeling, and at Paro Taktsang, Rinpoche has received and revealed mind treasures, including teachings from the cycle called ‘Jeweled Mind Treasury of the Three Families’ (Rig-Sum-Norbue-Gong-Dzod). He has received treasures concerning the complete aspects of the Gesar of the Three Roots, and of the accomplishment of the Four Activities combined together, as well as Phurba, Yeshe Tsogyal, Dorje Drolo, the heart practice of the Guru, Dzogchen, and so forth. He has received these many profound Dharma treasures at the appropriate time in order to clear the degeneration of the Dharma and of beings, and up until the present moment, he has revealed the auspicious number of eight volumes of terma.

Kyabje Dudjom Jigdral Yeshe Dorje in the colophon to the long life prayer that he composed for Namkha Drimed Rabjam Rinpoche wrote:
“May the treasure revealer who has discovered the authentic and profound Dharma of the cycle of teachings of the Heart Treasury of the Three Families live long!”

Kyabje Dilgo Khyentse Rinpoche wrote:
“Through the enlightened intent of the  Heruka Pema Gyalpo (Guru Rinpoche),  and through the power of aspiration of Dorje Ziji Tsal,  the great lion (Gesar), of the Jewel Treasury of the Three Families,. May it Bring benefit and happiness to the teachings, And beings in this degenerate Time!”

Nyoshul Khen Rinpoche Jamyang Dorje, in the colophon to Supplication to the Great Tertön, The Chariot that Leads to Devotion, wrote:
Upon the occasion of having the fortune to receive the ripening empowerment and liberating instruction of the quintessence of Guru Pema’s profound Dharma, the profound mind treasure received at the appropriate time by Tertön Namkha Drimed Rabjam Rinpoche, the cycle of teachings of the Jeweled Mind Treasury of the Three Families, supplicating with great faith and certainty will pacify all of the harm that may come to sentient beings in this turbulent degenerate time, and will spread the activity of the profound Dharma throughout the reaches of space.

All of these accomplished masters and great beings, having found certainty in his profound Terma teachings, have praised H.E. Namkha Drimed Rabjam Rinpoche with their authentic speech. In many lands he has opened the door of the profound and vast Dharma. Having founded the Ripa Ladrang Foundation in the U.S.A. and thinking that this would bring further benefit and happiness to beings, Rinpoche laid the foundation of his vision of Rigon Tashi Choeling Monastery and residence for the Sangha at Yangleshod (Pharping), in Nepal.

In the tradition of larger monasteries with smaller branches, just as was previously the case in Tibet, with great kindness Rinpoche built this monastery as a means to ensure the continuity of empowerment and instruction of the teachings in general, and particularly of the glorious Ripa tradition. H.E. Namkha Drimed Rabjam Rinpoche, amongst his many and various skills and abilities to compassionately benefit sentient beings, is also a renowned divination master. While his enlightened activity for the profound Dharma is spreading, his life remains secured in the expanse of the seven-pointed vajra nature.

As a sublime incarnate master who ranks among the highest masters of awareness, he continuously bestows ripening empowerments, liberating teachings and spiritual advice to countless beings that are to be guided in these ways. His continual efforts to secure the Buddha Dharma extend through his compassionate Dharma Projects for the Tibetan refugee communities as well as to the building of the Ripa monasteries in India, Tibet and Nepal. His unceasing efforts to carry out enlightened activities in any way that will guide beings thus ensures that a rain of benefit and well being, in both the short term and the long term, will fall in a vast range of realms, establishing beings in the state of liberation. His Eminence is renowned as a divination master, which is called an ‘Arrow Divination’ based on the enlightened warrior King Gesar of Ling. His divination could clearly and reliably predict the likelihood of success or failure, or the positive or negative likely outcome, of any situation arising in one’s life.