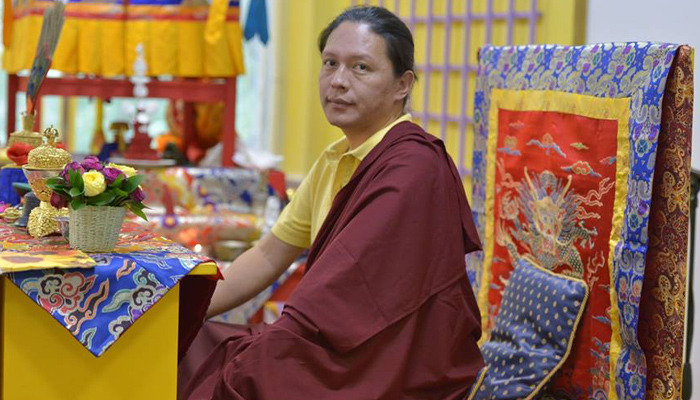 He was recognized as the reincarnation of Jigme Tempay Gyeltsen, the 3rd Tamdrin Lhunpo Chogtrul by Kyabje Drubwang Penor Rinpoche. In conjunction with his recognition, he was enthroned at Namdroling Monastery in Mysore amidst an ocean of lamas, tulkus, and monks presided over by Kyabje Drupwang Penor Rimpoche, who bestowed upon him the name Gyurme Thegchog Shedrub Tenpay Gyaltsen.

At Ngagyur Nyingma College, Mysore, he completed the study and contemplation of Sutra, Tantra, and general liberal arts topics, and completed the full nine-year program. In the manner of a vessel filled to overflowing, from Kyabje Dilgo Khyentse Rinpoche, Kalu Rinpoche, and Kyabje Penor Rinpoche he received a sacred stream of initiations, scriptural transmissions, and instructions, consisting primarily of the Great Precious Treasury of Terma (Rinchen Terdzo) and from his father he received the teaching cycle of Taksham and the Gesar mind treasures.